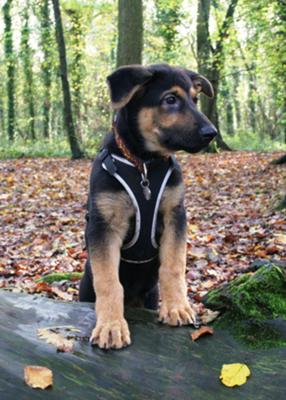 He is slim and athletic. His ears are up and down still, and he has one base narrow canine, which is being seen by a dental specialist very shortly. His baby canines did not drop out when his adult canines came through. He is mouthing like mad still, but very obedient.

He was barking at all dogs until we used a pet corrector compressed air spray, makes a loud hiss, when he was behaving badly followed by "NO", then praise when he was quiet. Worked a treat, and no problems now, just got to show the can to him and he behaves perfectly. On walks he has one ball, which is a control ball, which he will do anything for...

He is full german working lines with no sloping back, and six of his brothers are with the local police force. He had a guarding instinct from the age of 11 weeks, and when he and our daughters dog, Kody, Rhodesian Ridgeback, 6.5 yrs old 62kg, are barking at the back door and at our rear gate, no-one trys to enter, but if it's some one they know, loud high pitched squeals from both of them, and waggy tails!!!

Join in and write your own page! It's easy to do. How? Simply click here to return to German Shepherd Growth.