I actually grew up around cats. But as an animal lover, I've always had a soft spot for dogs. 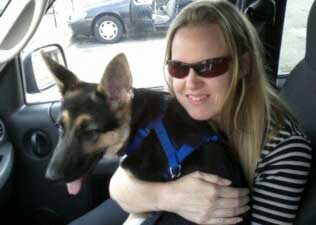 No matter what kind of day you've had, you know you will be happily greeted by an eager dog when you get home. Their unconditional love is truly inspiring.

I was a pet sitter for several years and longed for the day when I could get a dog of my own.

Though my cats went with me everywhere, for many years, my lifestyle and living arrangements never allowed canine companionship. I finished moving around, sold the condo and settled into a house. Finally, it was time.

And I knew just the dog I wanted. 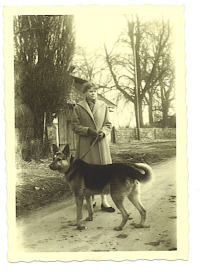 The German Shepherd dog has always amazed me.

Their courage, athleticism and intelligence are matched by few dog breeds.

My parents are from Germany and growing up, I had heard so much about this incredible breed from both of them. Here is my Mom with former Hanover police dog, Alfi.

So, I decided to get one of my own.

Not knowing any better, I found an ad in the paper and visited a backyard breeder. This was merely the first of many mistakes. Since then, I have learned so much. And I just wanted to share it.

After I brought Schatzi ("Schatten Jäger") home, I realized I had a lot to figure out. The German Shepherd is a very intelligent breed. I knew that. But, what I didn't realize, is that they are so smart, they will sometimes try to get out of doing what you are asking.

Schatzi obeys commands, but every now and then, she will "talk back." In puppy class, after the fifth round of repeating "sit" and "down," she loudly voiced her displeasure. The other dog parents looked at me, wondering why she was causing a scene. But, she wasn't just being a brat.

Once she learned the commands, she had no interest in repeating them incessantly. While the other dogs were content to perform sit-ups ("sit" and "down" over and over), Schatzi wanted to learn something new. In her mind, there was no sense in constantly repeating what she already knew how to do.

We didn't last very long at that particular school. ;) We hired a dog trainer who has experience with smart dog breeds. 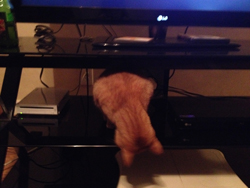 By the way, I still love cats. I keep hearing about people being designated as a 'dog person' or a 'cat person'. I don't think you have to choose sides (selective compassion - really?).

For all of you 'cat persons'... Aren't orange cats the best?! I swear they have the most amazing personalities.

My crazy orange kitty cat Paxton gets along with Schatzi as they "have an understanding."

Paxton and Ryder... not so much.

He is not cat-friendly (at all) and though Paxton swears she can take him, Schatzi gets in Ryder's face when he expresses too much interest in her.

This site allows me to share my knowledge and the lessons I learned in raising a GSD. To a worldwide audience.

And it's fun. I love "working" on my site. And discussing German Shepherds with people all over the the world.

But there's another bonus. Did you know...


Your Knowledge Can Become Your Livelihood

Everyone knows something about something. Why not get paid for doing what you love?