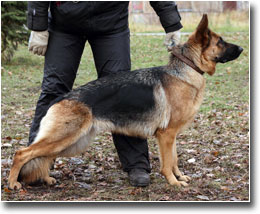 The German Shepherd Dog is also known as:

Captain Max von Stephanitz is the founder of the breed.

German Shepherd history is relatively short at just over 100 years.

The SV (Verein für Deutsche Schäferhunde) breed standard for coat: "The normal (stock) coated German Shepherd Dog should carry a thick undercoat and the outer coat should be as dense as possible, made up of straight hard close lying hairs.

Average litter size for the German Shepherd is 8 puppies. A good reason to spay or neuter.

Famous dogs of the breed include:

GSDs were first trained for police work in the 1890's in Ghent Belgium.

The first German Shepherd was exhibited in America in 1907.

A member of the herding group, the first GSD was registered with the American Kennel Club in 1908.

In 1917 England, the GSD name was changed to Alsatian.

Rin Tin Tin and his sister Nanette were discovered in 1918 in a bombed war dog kennel in Lorraine, France. Rinty is credited with saving Warner Bothers Studio from bankruptcy.

Strongheart became one of the first canine stars of the silent movie era in 1921.

Vietnam war hero, Nemo, becomes the first sentry dog to be officially retired from active service (with honors) in 1967. Unfortunately, only a handful of the ~4,000 Vietnam war dogs that served were brought back.

H.R. 5314, was signed in 2000 which allowed (finally!) for the adoption of retired military working dogs.