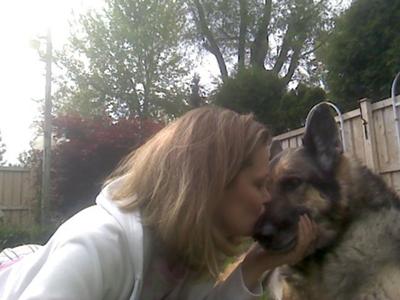 Our last photo together the day she passed

I answered my phone one afternoon to an unknown caller (which I never do) in April of 1999 to hear the voice of a friend start off the conversation with “I know this dog”.

She went on to tell me about a sable colored female German shepherd that was in dire need of a home. In her 5 short months on this planet she had already had 3 homes and it seemed no one was willing to give her chance. I’ve had GSDs all my life but have never been a fan of the sable color nor ever wanted a female. But to appease my friend I said I would come out to the boarding kennel she was being kept at and check her out.

After my hour long drive I arrived and already had it in my head that I was not interested and not leaving with this dog. My home was dog free at the time and I was busy with a 1000 other things I had going. That all went out the window when Cara came walking out of her kennel carrying her ball, plopped it in my lap and proceeded to assault my face with kisses.

On my way home I called my husband and told him congratulations you’re a father, start dog proofing the house. In the following weeks that we had her home the quirks started to come out. My alleged sweet dog was a fear biter, a growler, territorial, hyper and any other thing you could think of. To top things off she was also not your standard size female GSD. Someone forgot to tell her to stop growing and she was 3+ inches over standard for the breed so not only did I have an ornery dog I had one the size of a small pony.

One afternoon while getting ready for a walk I reached up with her leash in hand to adjust my hat. She dove for the floor yelping in fear; someone had beaten this poor animal with a leash. At that moment I decided that no matter what happened this was going to be her 4th and final home, I was going to fix this.

It took years of training, behavioral specialists, medication and good old fashioned patience before this hell on paws and I finally reached an understanding with one another but it was well worth it. She became my partner in agility, even though I could never keep up, my pillow at night even though I never got to have much of the bed but most of all she became my best friend.

I always said that crazy dog would outlive us all and I would come to regret my choice of words. Last year at the age of 11, I took my furry friend to the vet because she was starting to dribble a little urine and I assumed it was just a weak bladder which is common in older females.The vet called me in the back room to show me her X-ray and as a nurse I know what cancer that has spread looks like.

My poor girl was diagnosed with a splenic hemangiosarcoma that has also spread into her lungs.

He told me she had no more than 30 days to survive so I should enjoy what time I had left with her and to call when I thought it was time.

What a decision to have put in my lap that I had to be judge jury and executioner to my friend. 2 weeks to the day of our vet visit Cara spent the day in the yard running with her brothers (yes my dog free home had turned into a zoo once again as the years went on) and enjoyed a wonderful steak dinner for a treat.

At 2am that morning which was Mother’s Day, Cara climbed on my lap to lay her head and quietly passed away. She had spared me the task of having to make the tough decision of when it was her time. I think this was her way of saying thank you to me for never giving up on her. I will always cherish the time I had with her and will never regret my decision to keep her.

I am proud to say “I know this dog”.
Tweets by @GSDLore