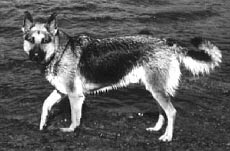 I have an incredible Shepherd named Mowgli he has been my greatest and most loyal friend for 5 1/2 years. I got him in Bangalore, India. He was born on March 1, 1994 and he was the last of 9 puppies. His mother was a tall, beautiful bitch and his father I never saw because he had broken his back in a car accident and had to be put down before the puppies were born.

I paid $350 for him. I want to get another one but would prefer it if he or she were a relative of Mowgli. When the puppies were born they were all named after different types of alcohol. Mowgli was named "Scotchie" others were "Kahlua", "Schnapps" etc.

I am trying to locate anyone who got one of these puppies so that I might be able to get a another within the same bloodline. I never registered Mowgli and he has been neutered, so I am sort of at a loss in that way. I was wondering if you could put this on-line and a picture of my beloved dog so that maybe I could find a sibling!

Join in and write your own page! It's easy to do. How? Simply click here to return to Dog Stories.