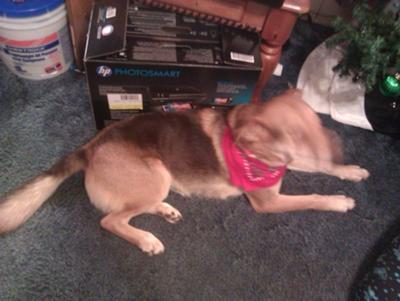 I have a German Shepherd mix. He has a red nose and his ears are floppy and appear to look just like a boxer's. You can tell he has German Shepherd blood line due to all the rest of his features.

We adopted him from a local shelter. They said he was shepherd hound mix. And was just trying to figure out anything we could about him.

He's about 4 and he doesn't like aggressive behavior. He will growl but he NEVER barks. He also has issues with other male dogs who try to mate or even attempt to look excited about anything.