Shiva not so Dainty!! 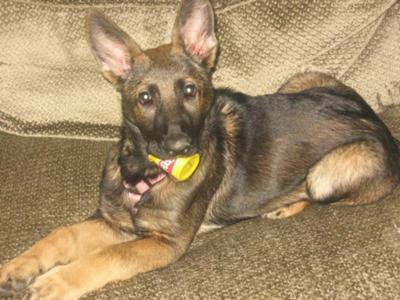 So our GSD puppy Shiva we found after searching the paper for a while. We found a breeder that was selling some for reasonable cost, but I was still worried and most people (after we just got her) disagreed that she was full blooded German Shepherd... Until I found out why.

She is of european blood line and her great- grandfather was a trained police dog.

Her ears were short, her paws were small, she was pretty tiny and her tail slightly curled when she stood up.

But the breeder sent me emails reassuring me she was of good blood line.

Come to find out we got the alpha female of the group so she is quite feisty and bull headed.

As she got older, we now see she is not going to be a tiny gal... and has now developed huge paws and ears....

She just got a weigh in of 34.lbs and she is still a few days away from being 3 months old.
Tweets by @GSDLore