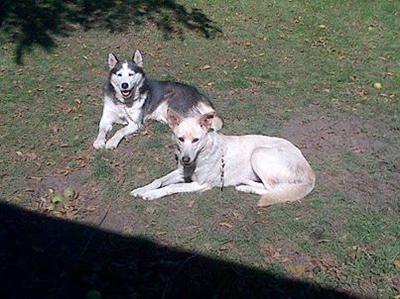 My dogs name is Akira. She's a white shepherd/husky mix and approximately two and a half years old

I actually rescued her from a couple that were going through a divorce and neither of them wanted her, so they were considering shooting her.

I know nothing of her background unfortunately, but she is a very mild tempered dog and loves snuggling on the couch with me on those cold winter nights.

Recently, I adopted another unwanted dog named Cujo. He is a Malamute Husky, going on six years old but has the energy of a puppy! They get along very well. You might say it was love at first sight.

Join in and write your own page! It's easy to do. How? Simply click here to return to German Shepherd Husky Mix.