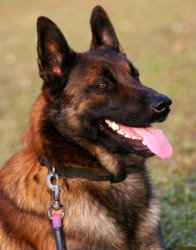 Do you have a Belgian Shepherd Malinois mix?

Your dog is likely an extremely hard worker, with energy to spare and a high prey drive.

The Belgian Shepherd dog Malinois is a bit more compact in size than the German Shepherd. Their bodies are more square than long.

Distinguishing features of the Malinois are their fawn color, black snout and black tipped ears.

Not recommended for inexperienced owners, the Belgian Malinois is primarily bred as a working dog for:

This demanding breed needs ongoing supervision as they simply refuse to be ignored. As I'm writing this, I am watching my Malinois mix randomly choose "toys" from the recycle bin and stashing them in the yard.

Due to their intelligence, the Malinois Shepherd mix will pick up on things quickly. A firm, but gentle hand is needed as hard or heavy-handed training can lead to uncooperativeness.

Challenges in training the Malinois Shepherd mix are as follows:

Like the GSD, the Malinois requires extensive socialization. They are instinctively protective and highly observant with strangers. You want them to initially be aloof and reserved, but not oversuspicious. Herding behavior (chasing, circling and nipping at heels) will also need to be nipped in the bud. 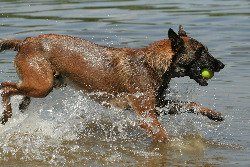 Herding dogs breeds are happiest when they have a job. Rote and repetitive training will quickly bore the Belgian Shepherd Malinois. While some breeds are content to endlessly fetch a ball, the Malinois needs a purpose beyond simple and undemanding repetition.

I know this from experience. After the third time of retrieving a tennis ball, Ryder got bored and actually walked away.

This trait can be nurtured with proper training. They excel as service dogs, and thrive in conditions where their skills are considered necessary.

The Malinois was named after the Belgian city of Malines. Belgian shepherds come in four varieties:

The AKC has recognized all as separate breeds since 1959, except for the Lakenois.

A light but constant shedder, they will blow their coats twice a year. These dogs need infrequent baths - only as necessary, as it may disturb the natural waterproofing of their coat. 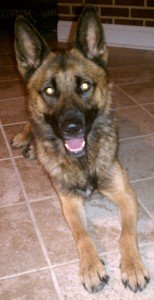 The German Shepherd Malinois mix, with its high prey drive, will chase anything that moves. Don't introduce small animals without great care and supervision.

My GSD was a puppy when we got her, so she is very friendly with the cats that were here before her. Ryder, not so much. He is not allowed near the cats, since he has shown an aggressive curiosity towards them.

These dogs are good looking, intelligent and loyal. But they are not well suited for first time owners. They can become destructive when bored, or without an outlet for their high energy. The Belgian Shepherd Malinois requires extensive socialization and training with a careful and experienced hand.