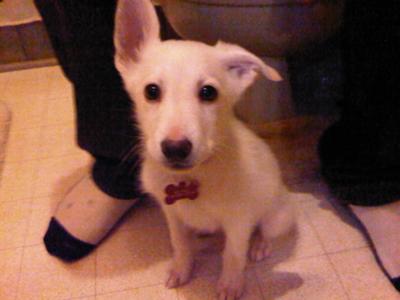 My boyfriend and I bought an all white German Shepherd Lab mix puppy about a month ago from a breeder in London, Ontario.

When we got him at 3 months old he was only 9 lbs. The woman only fed him a teaspoon and a half of soft food a day. Also she trained him to go to the bathroom in her kitchen. None of the puppies had ever been outside!

All of his bones were showing, and he resorted to eating his own poop due to being soo hungry. Thank God we rescued him when we did!

Anyways, he is now 4 months old and only weighs 16.2 pounds. He has almost doubled in the month we have had him and his bones no longer show. But I am worried he will always be small and underweight. Any ideas as to how I could help him to gain weight or will he always be a smaller dog?

Please, nobody buy a puppy from a woman named Joyce Lozier!! She is a horrible breeder who should never have had puppies raised in her home.
Tweets by @GSDLore