Learn to Read Dog Body Language Like a Dog Whisperer

No Touch, No Talk, No Eye Contact.
~Cesar Millan, "The Dog Whisperer" 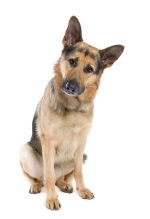 If you've ever watched The Dog Whisperer, you have heard that phrase when a new person enters into the dog pack. I imagine it is to keep you from doing the following:

Sometimes you panic and find yourself emitting remarks so profoundly inane that you would be embarrassed to say them to your dog. Your dog would look at you and think to itself, 'I may lick myself in public, but I'd never say anything as stupid as that.'
~Dave Barry


How Do You Recognize Dog Body Language?

A tail can tell you a lot about how a dog is feeling. The position of the tail, as well as its movement, can tell you what is going on in the mind of your dog.

Facial expressions and body stature are also something you should pay attention to. Learn to recognize signs of dog body language.

A recent study confirms signs of dog body language. A dog will wag her tail predominantly to the right when she is feeling positive or happy thoughts about something or someone. And the reverse is also true. When a dog perceives something potentially negative, her tail will wag more towards the left.

This fascinating study, "Asymmetric tail-wagging responses by dogs to different emotive stimuli," appeared in the March 20, 2007 issue of Current Biology.

Apparently the muscles on the right side of the tail are much more apt to reflect good emotions, while the left side is more prone to showing bad ones.


As the Dog Whisperer says...

"Be The Pack Leader"

The pack instinct will make you a great observer. You will pay closer attention to everybody and everything around you.

Though you may not realize it, your dog watches and listens to you... All the time. She learns your patterns of behavior.

Sometimes, you may think that she can read your mind. But, her ability to predict your next move is a result of very good observation skills.


Know What Your Dog is Thinking - Recognize Dog Body Language

Learn to "Speak Dog." It will help protect those that you love.

Recognizing dog body language may not turn you into a dog whisperer, but it will strengthen the relationship between you and your dog.