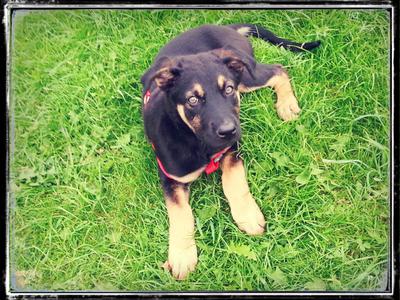 Her name is Keela.

I was given pick of the litter from next door. She had recently aquired a female Malinois (pedigree) and was unaware that the said bitch was pregnant. Several weeks later later she gave birth to a litter of 7 adorable pups...

She is a Belgian Malinois crossed with either Alsatian/GSD or Rottweiler?

I train her in the garden every morning with techniques from obedience ebooks and DVDs I've downloaded for around 15 mins... then I walk her around 2 pm for roughly 90 mins then same again at dusk. This to increase when she gets older.

She's very playful... sometimes rough with her playful biting. She was easy to train on her puppy pads from 6 weeks old leaving little to none of her mess off the mats. We don't keep her in a cage which has resulted in her chewing skirting boards. When I walk her ever since her first outing she hated her harness resulting in a very short walk taking longer than the Missus doing her hair (so long it became epic and vintage). So since then I've walked her off the lead and she walks by my side, without running off.

She's obedient and trustworthy already and lays down on the command "down" from a distance of been called of as far as 80 meters. I'm currently in the process of clicker training her.

She has a "mad" hour every night around 9 pm where she runs ragged with no awareness of her own safety or others. Very mischievous at this hour... :/

The lady I got her from informed me that she had been in the presence of both Shepherd and Rottweiler which resulted in her been pregnant but she thought obviously when the puppies were born and with their dominant markings much like that of a Rottweiler just not as "tanned" as a Rotti... she assumed from the story she was told that they were X Rottweiler.

Now a guy came to collect the mum to take her away for training as she (the belgian malinois pedigree) was becoming destructive in the garden where she wss kept on a chain day in day out in the recent baking heat... :( No wonder she was becoming destructive... as Mali's do if not exercised or mentally stimulated enough throughout the day...

Anyway, the guy who trains GSD's etc., said that the were clearly crossed with German Shepherd?? I need help dictating which breed she is... she's definitely Mallinois as I've seen the mum, but I'm not convinced as with the colour markings that of the Rottweiler and no pointed ears :(

Can anyone with more experience help me figure this out?