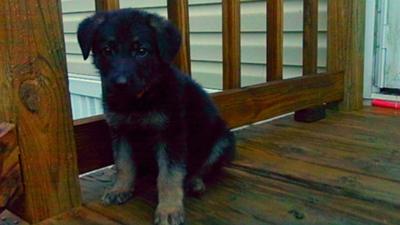 Just recently I purchased my first GSD. He was 5 pounds at 7 weeks. At the 8th week he was still only 5 pounds. We found that when we took him to the vet the day after we brought him home that he was filled with hook and round worms. The poor guy was covered in fleas and one tick. You could feel every rib, bone and vertebrate on his little body.

The vet told me that he was extremely underweight seeing that I was told he was 8 weeks and should be 15-19 pounds by now. The vet checked his teeth and said he looked to be only 6 weeks and the breeder probably pushed him off early but didn't tell me the correct birth date. The man did seem that he could have been in need for some money so I could believe what the vet said.

Sumo went 2 days without eating any food no matter how much money I spent on the so called best and healthiest foods that are offered. Finally I tried Purina puppy chow and he ate with tenacity. I was so excited seeing as how frustrated and anxious I had been when he wasn't eating.

Today 6-29-11, Sumo is 8 weeks and 2 days and is now 7 pounds. I will try to keep his progress posted for anyone that may run into the same problem I have. There are some stories that I have read on this website that have helped me to have some hope that my little guy can still have good potential as an adult GSD.

If anyone that reads this is experienced with GSD puppies let me know if he looks like an 8 or 6 week pup. I feel that he looks younger based on his face.

Thanks for reading.
Tweets by @GSDLore