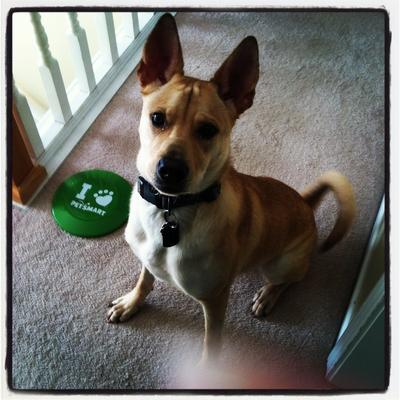 Our beautiful boy is named Titan, but usually gets called Pups or Tity-pup in honor of his very playful, curious nature.

We got Titan from a local humane society where we were told he was a GSD Husky mix.

We don't really see Husky (though it's possible) as the way his tail curls, his stockier build, squared head and snout, and almond shaped eyes appear Akita in nature. His coat isn't very long, probably a little longer than a shorthaired Shepherd, but it is thick and has that water resistant quality typical in Spitz breeds.

He also isn't very vocal, only barking when necessary and choosing instead to whine a little when he needs something if shoving his cold nose under your arm or in your face doesn't work (quite startling if you fell asleep on the couch).

He has a very healthy appetite, if he likes what he is eating.

He gets 2 - 3 walks a week that are usually 45 minutes in length, but we also take him to the dog park and/or to our local green space to run and play in the creek at least once a week as well. When we can't go to either of these places, we play fetch and chase in the yard.

Titan is very sweet and loving, but he is also full of energy and loves to play - EVERYTHING is a game to him. His favorite game is to peek around a corner until we "chase" him, then he tears through the house. Over and over. It's fun, but kind of exhausting. We're not complaining though; Titan is a joy to us.

He LOVES other dogs, but can be a bit rough with the smaller breeds, so we stick to playing with the larger dogs. He also adores people, children especially.

He is extremely smart and a bit stubborn. He learns fast, when he wants to. He takes time to figure things out; he has learned that his horseshoe toy can go through the ring he has. When we first took him to the creek, he wasn't too fond of the deeper water, so when he crossed the creek and realized he couldn't get back across without going back through the deeper water, he looked around and found the bridge to cross back to us...we had never shown him the bridge before.