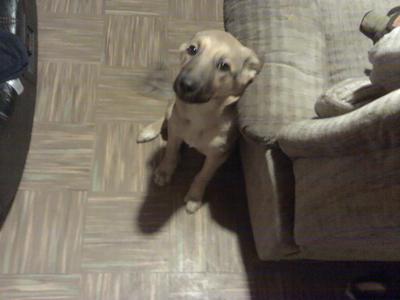 Mabari, my GSD Mix: Just a month after we got him

He's only a year old, has a red tint to most of his fur, a rounded snout and is really hyper.

He's very smart but tends to be easily distracted. His name is Mabari. He is slightly thinner than a German Shepherd and looks goofy. Like, when you look at his face, you can tell he's a goof ball.

He knows when I don't want him to do something, like chase my cat, so he'll just stare at the cat like he wants to then look at me and simply walk away from the cat. I'll have to take a new picture of him.

I am really not sure what mix he is. It would be nice to know but it doesn't really matter. He's my baby :)

He got parvo shortly after his picture was taken and I watched over him night and day and nursed him back to health. Of course, we went to the vet. I sold my car to be able to take him. It was a broken down car, transmission went out. They only paid me about $200 but my Mabari is a healthy hyper doggy now.
Tweets by @GSDLore