Actually, Noel was not the puppy I originally picked out. I remember holding another puppy when a friend of mine said, "This one is cuter - you have to take this one home." 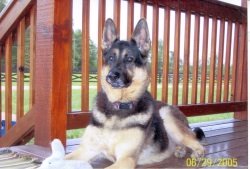 And so it begins... my story of degenerative myelopathy.

I cannot imagine having another dog breed. I have had two German Shepherds - Nick and Noel. Nick was my first German Shepherd and is Noel's great, great grandfather. Nick did not have much personality and was extremely protective of me.

Noel, on the other hand, is everyone's best friend, has loads of personality, and will lick you to death. I have often wondered whether she would actually defend the family!

From the onset, Noel was a character.

Wayne and I installed a 16x30 in-ground swimming pool. I came home one evening and was panic-stricken because I saw Noel in the pool and thought she had fallen in. Here I go running outside to help her only to learn that she knew what to do - swam right towards the steps and out she went to greet me.

Needless to say, she helped herself to the pool whenever she wanted!

Then, there's the television cable. I came home, turned on the television and the cable was out. I checked the cables running to the back of the television and everything was fine. Wayne went outside and found that it was not connected. So, we thought, no big deal, it just came undone, it's been fixed, no worries. Came home the next day, cable not working. Wayne checked it again, but this time, the cable had been chewed. Now we know who the culprit is - Noel. Again, no worries, Wayne fixed it. The next day, same ole' thing. This time, Noel chewed through the cable.

So, Wayne took the cable and tied it loosely around Noel's collar. She wore the cable for about four hours, totally upsetting me, but Noel learned the lesson. Comcast Cable replaced the cable and Noel never chewed it after that.

In July 2000, our house sold and Wayne, Noel and me moved in with Grandma and Grandpa. Talk about spoiling a dog even more! Grandma and Grandpa did not work and Noel received their undivided attention. It got so bad that when Wayne and I got home from work, Noel hardly acknowledged us. There were many times when Wayne and I would take Noel to McDonald's just to get back in her good graces!

After 14 1/2 months, we finally moved into our house. After a week of leaving Noel at home while we went to work, it was deemed necessary for Noel to be dropped off at Grandma and Grandpa's every day because all three of them were going through DT's. Grandma and Noel also spent a lot of time sitting on the back porch together to the point where Noel had her own chair right beside Grandma's. These are the days I wish would never end but unfortunately we all age and Noel is no different.

About five years ago, we noticed Noel's hindquarters began to stiffen (especially during the winter months and rainy days). She experienced some difficulty walking, getting up stairs and sometimes her balance was a little off. The vet placed her on steroids, in conjunction with Rimadyl, which worked for a while. 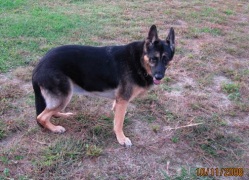 Then, about three years later, Noel began to deteriorate significantly (i.e., she experienced difficulty lying down or getting up, and when she finally got herself up on her own, she spent several minutes "getting herself together" before she walked; she drags her rear leg while walking; she stumbles; loses her balance to the point where her hindquarters slip out from underneath of her; and if that is not bad enough, there are times she simply cannot get up and Wayne or me have to pick up her hindquarters and guide her).

When we got home from Virginia Tech, many people had their own suggestions of what we should do, but one friend suggested acupuncture. For the last three years, Noel has received acupuncture and a shot of Adequan every other week and Metacam once a day, which allows her to walk on her own and climb stairs.

There are even times when Noel runs and chases a stick, which she has not done in years. One thing to remember, acupuncture and these drugs do not stop the progression of Degenerative Myelopathy but helps to slow it down.

Noel continues to have all of the symptoms of degnerative myelopathy mentioned above (plus diarrhea which is a side-effect of Adequan), but we are determined to give her the best life we possibly can until the absolute end.
~Beth

R.M. Clemmons, DVM, PhD, has made some breakthrough discoveries in researching degenerative myelopathy for much of his career.

"We know that DM is associated with changes in inflammatory proteins and altered immunity. We now need to determine how these proteins become abnormal so that we can repair or prevent this damage.

Further, we feel that by investigating this damage, we can unlock the potential for these patients to recover."

You can find more information about Dr. R.M. CLemmons and the fight against DM in GSD's, including affordable DM DNA testing.