Thundershirt to the Rescue!

Is your dog afraid of thunderstorms?

I saw it recently at the local PetCo and asked an employee if it really worked. She said emphatically that it does and joked that she had discovered its secret long ago.

Over 10 years ago, she would outfit her noise anxiety driven dog with a tight T-Shirt. This soothed him during thunderstorms. Now, at the first hint of thunder, her dog races towards the dresser where she stores his comforting shirt.

How Does It Work?

The Thunder shirt is made of a soft, stretch material that provides gentle and constant pressure around your dog's torso. The velcro closures make it easy to apply.

So, why does this work?

Continuous gentle pressure on the central nervous system appears to soothe the brain.

Animal expert Dr. Temple Grandin believes that pressure has a calming effect on the nervous system. Autistic herself, she developed a "hugging machine" to relieve her own persistent anxiety.

Just as you would gently hug a crying infant, your own dog will feel comforted and secure, distracting her from concentrating on the source of her fear.

How Do I Know if my Dog is Afraid of Storms?

Some breeds have a higher incidence of noise anxiety such as Collies, Golden Retrievers and German Shepherds.

A dog with thunderstorm or noise anxiety will exhibit any of the following symptoms: 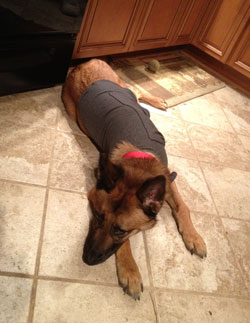 Ryder, my rescue Belgian Shepherd Malinois, is terrified of thunderstorms. I don't know much about his background except that he was picked up by animal control several times for wandering. Apparently, he was outside much of the time.

If he hears thunder when we're outside, he will run towards the door, jumping and frantically pawing to try to get inside. Once indoors, he is not much better. He follows me around whining and drooling.

Before I knew better, I would pet and coddle him in an effort to console his fears. He interpreted this as, "SEE?! I do have something to be worried about!"

I was a bit skeptical when I ordered the Thunder shirt. But here is Ryder laying calmly on the kitchen floor while a vicious storm thunders outside.

This happens every time. As soon as I put his snuggly sweater on, he calms right down and typically goes to sleep.

I am now a believer.

Why is My Dog Afraid of Thunderstorms?

Dogs can hear about 4 times the distance that a human can. And just as we can hear better when we cup our ears with our hands, the ears of a German Shepherd are upright, mobile and curved which can maximize sound.

Your dog may also be able to smell a thunderstorm coming long before we do. And sense the accompanying change in barometric pressure. Static electricity may even build up in her fur as the storm approaches.

There are medications that your vet can prescribe to temporarily relieve anxiety. But, unlike drugs, this natural solution has no side effects.

(Ron won a Thundershirt in my last contest)

Hi, RON here. During last storm THUNDERSHIRT was a GOD SENT. My sister wants one!!!

The Thundershirt not only works for thunderstorms, but can also work for a number of other issues:

Over 80% of dogs show improvement of canine anxiety symptoms using this cost-effective and natural method.

Doesn't work for your dog? Simply return it.

The company stands by its product, and even donates returned thunder shirts to non-profit animal organizations.