What is he mixed with? Extremely small dog 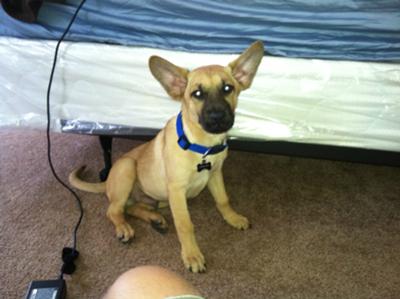 He's about 3 and a half months old and only weighs 13 lbs!

They said he's a lab chow shepherd mix. His size contradicts the growth charts for any of those breeds. I adopted him wanting a big dog, I'm not a huge fan of smaller dogs. I don't know if I should keep him, he's a good dog, smart and learns fast but his size isn't right for me.

I'm very active and wanted a larger dog to better fit my lifestyle. I'm having the hardest time deciding whether or not to keep him. I want to be fair to him as well because due to his small size I can't bring him some places that I would normally go so he would have to sit at home in his crate while I'm out and that's no fun for him. Any advice?

Maybe he's just a slow grower? I've sorta ruled that out after researching online. I have a bad feeling he just won't be more than 30 lbs. I'm looking for 50-80 lb + range which I thought he would be when I adopted him.

His legs are very short yet his body is quite long and he has a lot of skin that he can grow into.
Tweets by @GSDLore