Milou - On The Small Side 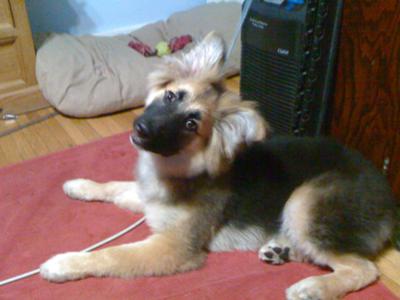 We got our little Milou when she was about 11 weeks old after she was dumped in a front yard. She was left with a note around her neck saying "2-3 month old GSD" but we're not sure if she's 100% GSD. Our vet seems to think she is a pure coated GSD, likely from a backyard breeder and thus not particularly good American stock but she was too sweet, smart and beautiful to turn down. She was really ribby, had worms and weighed in at about 22 lbs with food in her belly.

She is now 15 and a half weeks, has been wormed and given her first two sets of puppy shots. She weighs 28-29 lbs depending on whether she's eaten. I have read that she should weigh considerably more, almost 36 pounds now, but I think it may be due to her diet.

We feed her an exclusively raw diet, both homemade and commercial. The staple is chicken though she gets beef, duck, turkey and salmon as well. She seems to gain more on our homemade diet (chicken and beef with pureed kale, carrots, broccoli, cauliflower, strawberries, blueberries, and raw meaty bones) than on her Stella and Chewy commercial diet, though she is a picky eater and will try to refuse food. I have read that kibble, especially puppy food, can highly accelerate puppy growth putting strain on bones and joints. It seems normal than that she might grow slow and steady on a raw diet.

Does anyone else feed their GSD raw food? Have you charted their growth and noticed slower than normal growth?
Tweets by @GSDLore