A puppy growth chart can help you tell if your pup is on track with the appropriate puppy stages. German Shepherd puppy development begins at birth.

Like all puppies, German Shepherds are born with their eyes and ears closed. Basically immobile, they are completely dependent upon their mother.

A part of their umbilical cord will still be attached. But, this will soon dry up and fall off on its own in a few days.

This period of puppy development lasts about 2 weeks. Their heart beats much faster (around 200 beats per minute) and their body temperature is lower than an adult. Adult German Shepherds have a normal temperature of 102º while puppies are normally between 94º to 97º.

As their nervous system is still developing, puppies will commonly curve into a comma shape when they are picked up. They are unable to eliminate without the help of their mother (or a caregiver) gently stimulating their anus or urethra by gently licking or rubbing the area.

During this time, it is very helpful for puppy growth and development to be handled by humans from this point onward.

At less than a week old, the puppies will begin to stretch their legs. They will also arch their backs when picked up.

Around the one week mark, German Shepherd puppies will crawl more frequently. Subjecting the puppies to short periods of daily handling will help the puppies develop exposure to stimuli. It will also help with earlier opening of the eyes and ears, hair growth, motor development and weight gain.

Around the week and one half mark, the eyes are ears begin to open. Their eyes will be blue. And they may not be able to focus immediately. 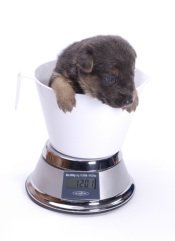 Their eyes and ears will be fully open and they are able to determine shapes. They will also experience their first incisor teeth. Crawling is much easier at this stage.

At this point a transitional period begins which usually lasts a week or so. Many important development changes take place as German Shepherd puppies begin to:

Two and a Half Weeks

Puppies begin to socialize with their littermates. They will wag their tails, play and "fight" with each other.

The transitional stage ends and the socialization period begins. Puppies are walking pretty well at this point and their gait becomes similar to an adult dog. This phase is full of exploration, from their environment to their littermates.

The socialization stage can last from 2 and one half weeks thru 13 weeks. This is where the puppies learns social skills and experience emotional development.

Many changes take place during this time. Puppies are able to identify their own species. They can also form bonds with others outside of their kind, including humans.

The puppies learn how to interact with their littermates and adult dogs.

Social play is an important aspect of this stage. They will play fight and communicate with their littermates, play with other animals (and humans) and begin playing with toys.

At this point, most of them have a full set of teeth. They can begin to eat soft food in addition to the milk they are getting from their mother.

Their body temperature will stabilize at around 100º and their heart will beat at a slower 170 BPM.

This is a great time for exposure to new experiences as the puppies are fearless in exploring their environment. Between 3-5 weeks is the optimal time for this type of socialization as this is when their attraction response is at its peak. From 5-8 weeks, the fear response appears and may take over.

Early socialization during this period is important in that it will shape the puppies' later relationships with humans and other dogs.

The critical period for forming social bonds in thought to be between 6-8 weeks. This is also called the fear period.

The puppies will begin to act more like adults, showing dominant behavior such as mounting their littermates. When meeting other dogs, they will sniff noses and tails.

The fear response may become more pronounced in some puppies. For others, the desire to socialize and make contact will overcome any apprehension.

A great time to socialize your puppy with other animals, humans and new surroundings. This is also an ideal period for learning important skills: 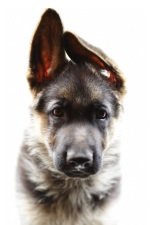 Be sure to accustom your puppy to being both groomed and handled.

This period is critical for exposing your GSD puppy to small children and a variety of animals. Otherwise your puppy may never truly tolerate them.

Your puppies ears may be starting to stand up as well.

Do not panic if they appear to flop or look lopsided at this stage.

During this time, the juvenile period begins and primary socialization wanes. The juvenile stage is believed to stretch into sexual maturity.

Your GSD should have all of its puppy teeth. And its temperature should be the same as an adult, or around 102º. Take note of their ear carriage.

Motor skills are continually increasing and the puppy is learning quickly. But, they are very easily distracted. Many people begin puppy classes at this time.

At this stage of puppy growth, most German Shepherds will have lost all of their puppy teeth. Their incisors are usually the first to be replaced with adult teeth.

While the skeleton is still growing, most of the puppies are now adult on the inside. Your pup is now a small adult with a decreased heart rate and a full set of adult teeth.

If your puppy is a female, she may have reached sexual maturity and had her first "heat" or estrus period.

Make sure your pup's ears are standing up on their own at this time.

Males will reach sexual maturity at this point. They may raise their leg while urinating.

This is a good time to make sure the pup is aware of their membership in the pack. A firm, but gentle, stance is required to handle any challenging dominance that emerges.

Your GSD will no longer appear to have ADD. This is an ideal time to begin obedience training.

At this point, your dog will have bonded strongly with you. Since your dog now communicates like an adult, it is a good time to read up on dog body language.

Large breed dogs, such as German Shepherds, can continue to mature up until 36 months. Many people do not consider a GSD an adult until the male is 2 1/2 - 3 years and the female is 2 or more.

Depending on the line of your German Shepherd, this puppy growth chart may not exactly match your GSD development. Puppy growth rate depends on a number of genetic factors.

Provide exercise and natural pet food so your German Shepherd will reach her full potential.